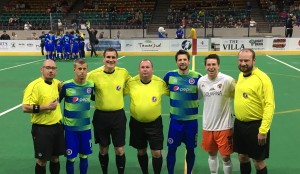 DENVER, CO – The Blizzard went from winning big at home on Saturday night, 15-2 over the Las Vegas Knights, to having their undefeated record snatched away from them less than 24 hours later at the hands of their rival, the Colorado Inferno, by the score of 11-6 at the Denver Coliseum. It was tied 4-4 at halftime, but the Inferno exploded for seven goals in the second half, outscoring the Blizzard 7-2 on their way to victory. The win moves the Inferno into a tie with the Ontario Fury II for first place in the West, while the Blizzard fall a half-game back of the Mustangs in the East.

Things were physical throughout, but even more so in the fourth quarter. At one point, the Blizzard were reduced to four on the floor after Cody Stratton and Alex Moseley were rung-up 21 seconds apart, Stratton for tripping and Moseley for elbowing. Moseley was then shown the red card as he already had two cards from earlier in the quarter for tripping (blue card) and unsporting behavior (yellow card). An ejection in pro arena soccer results from the accumulation of any three timed penalties.

The Blizzard are back at it next weekend on Saturday, February 17 for their final home game of the regular season versus the Ontario Fury II at 7:05 pm. Tickets are available at www.axs.com or at the Coliseum box-office.